The Quietus | Features | Reissue of the week: big noises that fill the air

This archival DVD release of 13 documentaries on the arts commissioned and produced by the Arts Council of Great Britain represents a treasure that has finally been released to a wider audience. The timescale of these films – 1979 to 1996 – sheds new light on those who fought to create art, music and poetry from the beginning of the Thatcher government until the false dawn of the New Labor. They show how, through their creativity, filmmakers and performers tried to make sense of the times they were living in.

What might surprise some is that despite all the attention paid to an era when punk morphed into post-punk and new wave, there is almost no recognition of rock music in these films. . Instead, the focus is on classical music (Anglo-Irish composer Elizabeth Maconchy); minimalism (Steve Reich); experimental and improved music (Cornelius Cardew, the Bow Gamelan Ensemble, Max Eastley); and new forms of music emanating from African and Indian forms filtered through the prism of British collectives like Asian Dub Foundation and Steel ‘n’ Skin. What passes for rock & roll attitude is personified by the subjects of the two flagship documentaries that dominate the collection.

The longest films are those of Franco Rosso Terror, beat and blood (1979) on the poet and activist Linton Kwesi Johnson, and the film by Nick May, Ten year old in an open collar shirt (1982) about poet / performer John Cooper Clarke, Paired As They Are on the DVD cover, the two men’s careers are subtly intertwined, particularly in May’s film as they are filmed together during a joint UK tour. Rosso’s film focuses on Johnson at the heart of his community in Brixton, writing and performing locally, recording his debut album (which gives the film its title), visiting his old school in Tulse Hill, and being interviewed for various publications. 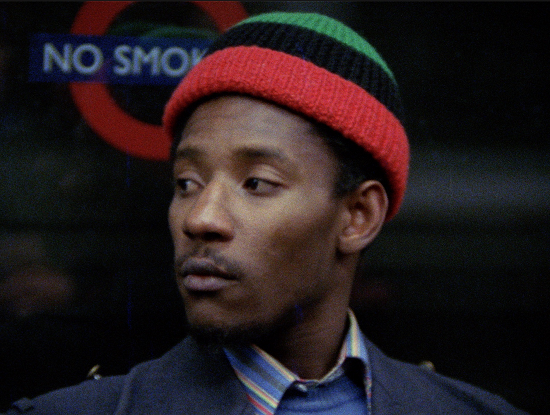 Rosso captures an artist completely immersed in his surroundings, whether it’s a performance in a youth club or simply shopping among the stalls in Brixton Market. These sequences are precious documents from a neighborhood that was already at the forefront of the anti-racist struggle, streets in which people would soon revolt. That sense of latent frustration simmers in every picture. It is Johnson himself who expresses this frustration, sharpening this anger in art via his poetry. His poise and control in front of any audience, be it a group of schoolchildren or a BBC interviewer, is extraordinary.

Not a word from his lips is lost. In a remarkable statement, Johnson says he found the English language “too sterile” to communicate, instead using what he describes as “Jamaican Creole.” This feeling of literally finding your voice outside of what is or is not acceptable language is still as sharp a criticism of what passes for language or communication as there ever was. The footage of Johnson’s performance is equally extraordinary, from the rumbling dubbing of his early recordings to his performance on the steps of a municipal building in Bradford during a protest in support of George Lindo, who was wrongly convicted for robbery. There is even a digression in an explanation of sound systems, itself a vital new (literal) subculture of music on these shores. 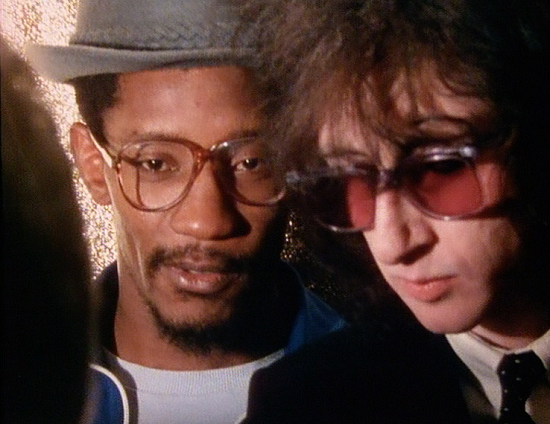 The political climate of the time is brought to the fore with reports of sectarian violence in Lebanon and references to the IRA and Rhodesia as Johnson walks the streets of Brixton. Johnson’s antipathy to National Front racism and the policies of the new Conservative government fades: “The Thatcher government is trying to put black people in a position of demoralization … in this country … While I’m here . , I will do what I can [to fight it]. “The film once again brings together some of those who participated in the anti-racist and anti-fascist struggles of the late 1970s and early 1980s, with invaluable footage of Darcus Howe and many others at work in the offices of Race today, a magazine Johnson supported and contributed to. With a battle so difficult to fight each day, the scenes that show Johnson truly relaxed, smiling and playing dominoes with friends, a welcome respite.

Ten year old in an open collar shirt is a somewhat more ‘cinematic’ film, with extended sequences used to accompany what John Cooper Clarke describes as the ‘high octane delivery’ of his poetry, creating a series of pleasantly dissonant visuals to complement the recitations of the immersive work of Clarke. Touring in the north of England with Linton Kwesi Johnson, Clarke is on the first wave of cult hero hits, in demand as a performer and for interviews. His charismatic character on stage, the verbally deft machine gun attack on the microphone is irresistible. His erased side behind the scenes is both a surprise and a relief.

May allows jarring details to surface: the chewing gum joke and the bonhomie of Melody maker reporter Patrick Humphries when speaking to Clarke disappears completely when confronted with the clarity and balance of Linton Kwesi Johnson’s responses; the casual homophobia of the photographer who is ironic that he should send a photo to Gay News when Clarke and Johnson are close to each other. The footage from Clarke’s performance is of course excellent, but Johnson steals the show and the film with a devastating performance of his most heartbreaking poem “Sonny’s Lettah”. The film is also notable for a fleeting but breathtaking appearance by Seething Wells, aka the late great writer and Quietus columnist Steven Wells, performing his poem “Tetley Man” as a bitter cry as part of the acts of support. 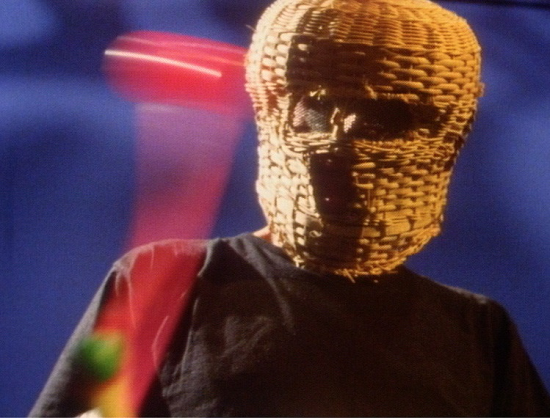 Even the movies with the smallest runtime can dig the deepest and have the greatest impact. Karen Martinez’s remarkable film Chutney In Yuh Soca (1996) demonstrates the origins of Trinidadian dance music in Indian cultural traditions, its post-colonial complexities, religious and ethnic tensions, and the hybridization of music itself that ensues in just 21 minutes. Smita Malde’s short film Strong culture (1995) feels like personal video footage due to his close friendship with the first incarnation of the young Asian Dub Foundation. It is also refreshing to see and hear creators speak in such political terms about the work they create to whom their work is intended and, just as importantly, to whom it is directed. Peter Blackman, the founder of the Steel ‘n Skin group does not hesitate to orient his workshops towards young black children:

“When we work with white children we find that we tend to provide just an afternoon of fun. When we work with black children we find that they take us much more seriously because for them we let’s represent a part of their culture, their true living culture that has been denied to them. So they jump at the opportunity to build as many as they can. “

Their exuberant performances for school and youth groups take on greater urgency once this sharp and explicit statement is made. In Margaret Williams’ film about Elizabeth Macconchy, the struggles she and her contemporaries faced in the 1930s are framed both in terms of class and gender. Maconchy told her friend Anne Macnaghten that “if you are a breastfeeding mother you have to learn to cope between feedings!” However, Macnaghten makes it clear that they were not discouraged. Inspired by the liberating conquests of women after World War I, but more particularly after the Russian Revolution of 1917, they began to perform their own work at the Mercury Theater in Notting Hill. This is one of the most surprising personal accounts I have ever seen of the real gains made by women through collective struggle.

The film that I was most eager to see was that of Philippe Reginiez Cornelius Cardew: 1936 – 1981 (1986) and it did not disappoint. Recitals of elements of his epic composition The great apprenticeship are impressive, as are the heartfelt tributes paid to Cardew by heavyweights such as Morton Feldman, Christian Wolff and Karlheinz Stockhausen; the latter’s praise is all the more surprising given the venom Cardew addressed to him in his virulent book Stockhausen in the service of imperialism. His reputation has clearly declined since this film, but his music deserves a revival. 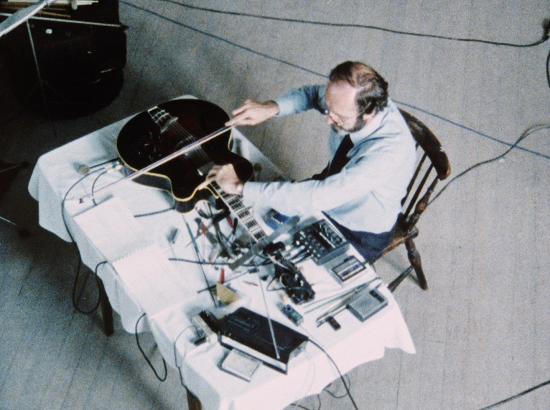 These movies aren’t cluttered with explanations or celebrity fans telling you why you should care. Where there is storytelling, it is punchy and precise. The best use of it can be heard in the films of Simon Reynell. His film about sound sculptor Max Eastley, Midnight hour clocks is my favorite of the whole collection. The scenes of Eastley’s Aeolian harps sounding near the waterfalls are simply fascinating and contrast with a group including David Toop and Steve Beresford demonstrating Eastley’s “swirling music”, all wearing wicker hoods. The final sequence of Eastley’s duet with free improviser saxophonist Evan Parker in a cave in Kent is an absolute joy to watch.

Commissioned and produced at a time of great social and political upheaval, questions of class, ethnicity, gender and identity are freely at play throughout these films. The participants are not doing well, their eyes dare to meet ours. At a time when artistic programming is once again threatened by unreconstructed little ones like Culture Secretary Oliver Dowden, hearing and seeing those who have helped shape our common culture, from the local level and upwards, is extremely inspiring. These films should be essential viewing for everyone.

Postscript: In the booklet accompanying the DVD, Rodney Wilson informs us that Dread, Beat and Blood has been carried over from its original niche in the BBC Omnibus art series as it could influence the outcome of the 1979 election. It was shown at a later date.

Great Noises That Fill The Air is now available